While there are many things on which I could comment in this article, I want to focus solely on the image that readers see when they first view it. Take a look at this for a moment, and then think about the implications of this image on school laptop programs, regardless of the discussion following it in the article. 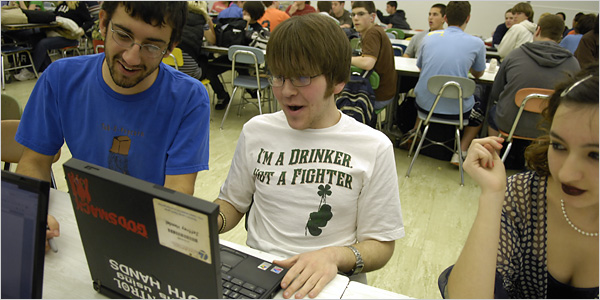 So, there are at least two reactions that I could have to this. One reading could be to look at it the way in which it was intended. The second gives me more pause.
The first reactions is, of course, to just look at the headline, read the article, and say, “yup, laptops are a waste of time.” Any kid who is more worried about drinking and Godsmack must be doing something bad with his laptop, right? These kids are having too much fun with this laptop to be “learning” anything (at least, what most of us envision “learning” to be, as associated with school). Also, the young lady in the picture has the look of “Oh, what are they doing now?” Combined, the composition of this pictures suggests lewd and, if not illegal, at least immoral activity going on with these two boys and their laptop escapades.
Granted, the caption of the picture does mention the fact that these students are at lunch, which implies that that should be on free time that they can use in their own way. But does that really matter? Given the headline, it is clear that the rhetorical affect of this image supports the conclusion that laptops are a worthless investment.

The other reaction is to simply, “Yes, you are right. The laptops are a waste of time indeed.” Now, what makes me say that. Well, despite the interview with Mark Warschauer, author of â€œLaptops and Literacy: Learning in the Wireless Classroomâ€ that shows up on page two of this article — and all the potential positive effects that laptops could have, the article ends on a disappointing note.

But in many other classrooms, there was nary a laptop in sight as teachers read from textbooks and scribbled on chalkboards. Some teachers said they had felt compelled to teach with laptops in the beginning, but stopped because they found they were spending so much time coping with technical glitches that they were unable to finish their lessons.

So, concluding that school hasn’t really changed much in the past 150 to 200 years, and that laptops are bound to have technical glitches that keep them from being used as tools in the classroom, we conclude that they are worthless. Beyond the issues of teacher professional development related to technology that I could talk about (and is mentioned in the article), what I want to suggest here is that part of the problem is that the reason so many computers are broke is because students aren’t expected to take care of them.

I feel that this article — as well as the issue of laptops in schools — is being explored from a one-dimensional model of schooling where the teachers/administrators are supposed to prevent all disruptive behavior before it starts and that kids, essentially, don’t have to take responsibility for their learning. These are issues bigger than just professional development and advocating for School 2.0, although those are definitely part of the discussion.
Instead, I think that we need to consider talking to students about how to take care of the technology that is supposed to sustain them in school. We don’t like gum under desks or scribbles in textbooks, and we teach students not to do that (and, if appropriate, discipline them when they break those rules). Is it possible that we are not teaching students the ethos of computer ownership, from taking care of hardware to being a good online citizen? Perhaps that is a side of the issue that we could look into more fully in future research.